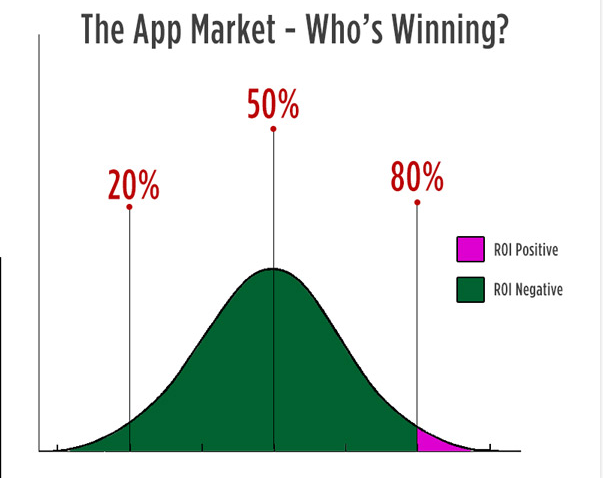 I’m really excited to introduce our guest series this week featuring Carter Thomas. Some of you may recognize Carter from our “Secrets of the App Store” interview. He’s got incredible tips and an extremely successful strategy called App Flipping. I particularly love this strategy as it brings me back to my real estate days when I flipped houses. Instead, we’re applying the same tactics to the App Store. Genius! We’ve been getting a lot of questions on this technique so we’ll let Carter take it from here.

OK everyone. Here’s that one sentence you’ve all been waiting for – the simple way to define app flipping:

App flipping is the process by which you create positive ROI on an existing app or app framework.

Boom. That’s it. In other words, it’s how you add value to an app. “Flipping” is a widely used term these days, mostly held for real estate and business, and is an effective way to define the PATH by which someone created a profit. You don’t “flip” a stock investment because you don’t add value. You can’t buy the stock, re-organize it to make it better, the put it back on the market. You make good investments, the market does its thing, and make money. In any market, the reason this model works is because of the bell curve. See the diagram below. 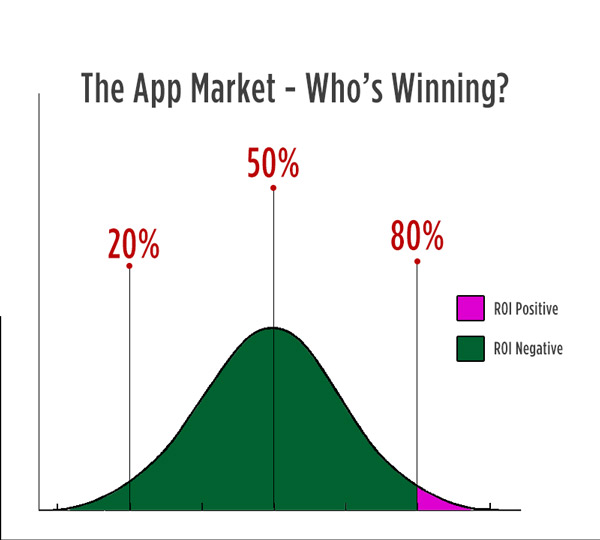 What does this mean? It is saying that, on average, only 20% of developers are ROI positive. This is taken from a ton of market research and boiled against fundamental economic theory.

A lot of people may look at something like this and say “Ugh. I’ll never be able to make this work!” and pack in their bags. If that’s what you’re thinking, you’re right – you won’t. App flipping is about seeing opportunities in markets, not being overwhelmed by obstacles.

Let’s take a minute and think about this. I want to share with you a few key pieces of information that you may not realize.

The first and most important piece of this is to remember that that curve represents ALL apps. Apps from 2006 all the way to 2013. Every single app every is being accounted for. Apps that were complete garbage, spam, terrible – they’re all still in there. This curve accounts for absolutely everything that Apple has ever allowed through it’s gates. Because of that, you can knock out a whole bunch of the potential competition…because it’s not competition. Those apps are no longer being cared for and will die off. Even new apps that aren’t cared for will die off. The most important point – A large majority of the apps in the store are junk.

The second most important piece is to remember what ROI is defined as – return on investment. This is a NET sum, not a gross sum. That means that if you make $1, you are ROI positive. If you make $50,000/month but you spend $50,001 you are ROI negative.

For most apps in the store, they are ROI negative for the first few months. Think about all the costs – staff, programmers, designers, advertising, everything. The upside may be huge, but so is the overhead (costs).

What app flipping does is change that mindset. Instead of hoping for one app to finally start paying off huge investments, we take control of our costs. How? By creating many and profitable assets from one common base.

Here’s an example of the difference in mindsets:

Developer A spends $5,000 on one game, built from scratch. He launches it and it makes him $50/day. He continues to pour money into the game, pushing his revenue up to $60/day. His costs increase at the same rate, if not higher than his revenue. ROI does not change.

Developer B decides to flip apps. He takes the same $5,000 and buys a source code for $300. He spends another $500 on development and design and adds lots of monetization tools. His costs are now $800 as compared to Developer A who spent $5,000 already. They both end up with very similar apps (also, Developer B saved 2 months of time because he didn’t build it from scratch).

Developer A launches his app and makes $50/day as well. Instead of sinking more money into improvements, he simply creates a second app with a new design. Same app, new design. This costs him about $500 (since the designers know this code and the developers don’t need to do much this time). He releases it. This app makes $50/day as well. He’s making $100/day total now.

He makes a third app with a new theme using the same code and new design for $500. Releases. That app makes $50/day.

You can see how powerful this can be. Two identical apps that have completely different ROI trajectories. At some point, Developer B is going to go ROI positive. Developer A probably never will.

The most important point – most developers don’t leverage their assets in a way that will lead to ROI positive outcomes.

The third point to remember is that many developers don’t understand the golden triad of ROI – development, marketing, monetization. We’ve all seen it – apps and games that have enormous marketing dollars, but terrible monetization pathways. Same with beautiful and well developed games that are hidden in the depths of the app store.

Why is that? Why would someone put so much effort and money into an app that doesn’t tackle all these key pieces?

The reason is because of education. This market is so new and still so hot, many people don’t understand that it still requires best practices and discipline to be successful.

There are thousands of developers that are convinced that beautiful games will magically bubble to the top. There are marketers who think they can just buy traffic and use keywords to make money. There are analytics gurus who think they can tweak users to funnel through your app and extract huge dollars from every download.

That’s where app flipping comes in.

With this strategy, you combine all these pieces to create a powerful package. Built on best practices and proven techniques, you will be able to put enormous amounts of apps into the store at a fraction of the cost of your competitors. The best part? All your apps will be designed to get more downloads and make money than everyone else.

The most important point – app flipping is about taking a knowledge of the app market and applying it to low cost, premium assets.

Now that you see why that curve is an OPPORTUNITY and not an obstacle, I want to explain to you how app flipping can work for you.

You can turn one app into dozens.

App flipping is all about decreasing the investment costs and increasing return. When you learn how to successful flip and re-skin apps, you’ll be able to take an initial investment and translate it into a business opporunity that is less risk and
greater chance of ROI positive success.

You can buy an app framework (source code) at a fraction of the cost of developing the exact app.

There is no reason to develop an app from scratch these days. Unless you have other motives, your primary focus should be on getting into the game with a winning framework that costs you much less and is proven in the market already.

App flipping teaches you how to find these source codes, identify the best ones, improve them, publish them, and monetize them.

You will take control of a market that is designed to control you.

When you play in someone else’s sandbox, they have the rules. One day they wake up and decide they don’t like your app – you get the boot. It’s happened before to some companies.

What app flipping does is put the ball back in your court. How? By teaching you how to develop a portfolio of apps that spread across the entire ecosystem. You’re not beholden to one or two apps – you’ll have 30, 50, 200 apps all churning for you 24/7.

Any impact the boss has will be spread much thinner and drop your risk considerably. You now have more control over your future than you ever would with a few apps.

Oh man is it fast. Probably more than any other business model, flipping assets (houses, businesses, apps) is one of the most lucrative for the time it takes to do so.

Once you learn the steps and understand the flow, your efforts will ramp up considerably. Not your TIME, but your OUTPUT. The same 5 hours you used to publish one app will turn into publishing 3 apps.

This grows geometrically. The better you get at flipping, the more apps you can produce, the more money you’ll have pouring into your bank account. Every day you will wake up with more and more opportunities at your fingertips.

Flipping apps is about adding value to an asset, then re-selling that value on the market. Once you understand how to do it, the sky is the limit.

1. The market is huge and full of competitors….who don’t know what they’re doing.

2. Flipping apps is a system by which you will take LOSING assets and turn them into WINNING assets.

3. This is repeatable, scaleable, and highly profitable.

You can flip ANY type of apps you want. Games tend to be the category of choice, which I will explain in the next few posts, but anything is fair game.

By the same token, you can flip anything in life if you think about it. Your weight, your attitude towards life, your financial stability – it’s all about taking something that LOW value and injecting HIGH value, then releasing it.

It’s proven and it’s powerful. There are a handful of people that are beginning to understand this and are printing money while they sleep.

In the next few articles, I will show you closer examples of how app flipping can be done easily and effectively. When you see how powerful this is, you’ll understand why I am so passionate about sharing this information.

I look forward to teaching you more,
Carter